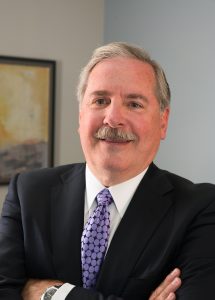 Jim Vidmar has always concentrated on business reorganization cases and debtor/creditor issues. He has significant experience working with businesses in financial distress. He has participated in many business insolvency cases in Maryland, Virginia and the District of Columbia, including work on behalf of Chapter 11 debtors, trustees in bankruptcy, banks, landlords and creditors’ committees. Mr. Vidmar has represented purchasers of loans and parties in bankruptcy sales. He often represents homebuilders and developers. He has defended many claims against commercial guarantors.

Mr. Vidmar is a past president of the Bankruptcy Bar Association for Maryland and is a member of the American Bankruptcy Institute. In 1992, Mr. Vidmar became the first lawyer in Maryland to become board certified in business bankruptcy law by the American Bankruptcy Board of Certification. He has been selected by his peers to be included in the 2007 through 2019 Maryland Super Lawyers and the Washington, D.C. Super Lawyers editions in the category of bankruptcy and creditor/debtor rights. He was named a top lawyer in business reorganization by Washingtonian Magazine. He is included in the 2010 to present editions of The Best Lawyers in America.

Mr. Vidmar has also served as a mediator in cases pending before the federal bankruptcy court and the Circuit Court for Montgomery County. He has completed the forty-hour mediation training course sponsored by the Maryland Institute for Continuing Professional Education of Lawyers.

University of Baltimore School of Law, 1980

U.S. District Court for the District of Maryland

U.S. Bankruptcy Court for the District of Maryland

U.S. District Court for the District of Columbia

U.S. Bankruptcy Court for the District of Columbia

U.S. Bankruptcy Court for the Eastern District of Virginia

In re: The Hagerstown Block Company and Hagerstown Concrete Products, Inc.

In re: Professional Arts Associates, Inc.

Counsel to debtor in sale of hotel project.

In re: Dorsey Builders, Inc.

In re: L-Soft International, Inc.

Counsel to debtor in successful Chapter 11 reorganization of a software developer and distributor.

Counsel to debtor in Chapter 11 of manufacturer of point-of-sale check coding device. Resulted in assets being sold to debtor’s principal.

In re: Van Leer

In re: Inphomation Communications, Inc.

In re: CJ Miller, Inc. and Miller Asphalt Products, Inc.

In re: ParaGea Communications LLC

Counsel to debtor in sale under Chapter 11 of satellite communications device manufacturer.

Counsel to debtor in corporate liquidation of software developer.

In re: Hidden Bridge Farm, L.P.

Counsel to debtor in sale of $14,000,000 farm on Maryland’s eastern shore pursuant to debtor’s plan of reorganization.

In re: On Tour LLC

In re: Gunther’s Leasing Transport Inc.

In re: Lake Marlton Limited Partnership

In re: Pleasant Excavating Inc.

Counsel to debtor in Chapter 11 of regional earth-moving and road building company. Debtor’s plan was approved.

Counsel to lender in recovery of loan secured by UHF television station.

President, Bankruptcy Bar Association for the District of Maryland, 1999 - 2000

Member, Board of Directors, Bankruptcy Bar Association for the District of Maryland, 1992

Business Bankruptcy Law, Board Certified, American Bankruptcy Board of Certification, 1992

"Sales of Assets Under the Bankruptcy Code", MICPEL, 2009

Panelist, "Getting the Chapter 11 Case on the Highway", Bankruptcy Bar Association for the District of Maryland Spring Break Weekend, 2003

Lecturer, "What Litigators Must Know About Bankruptcy", MICPEL, 2002

In re Hagerstown Block Company, 570 B.R. 494 (2017) (successfully represented corporate Chapter 11 debtors in their objection to proofs of claim filed by shareholders who had exercised their stock redemption rights)

Moving for Relief from the Automatic Stay, A Guide for Lawyers and Lenders, MICPEL

"What Litigators Must Know About Bankruptcy," Maryland Institute for Continuing Professional Education for Lawyers