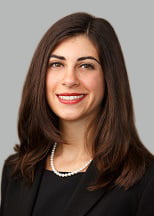 Prior to joining Yumkas, Vidmar, Sweeney & Mulrenin, Ms. Adams served as the term law clerk to the Honorable Robert E. Grossman in the United States Bankruptcy Court for the Eastern District of New York. During her federal clerkship, Ms. Adams handled hundreds of matters in cases under Chapters 7, 11 and 13. These matters involved a full range of issues arising under the Bankruptcy Code. As a judicial clerk, Ms. Adams also assisted with mediations in Chapter 11 cases.

Ms. Adams received her J.D., with honors, from St. John’s University School of Law, where she served as an Articles & Notes Editor of the American Bankruptcy Institute Law Review. Through her journal, Ms. Adams published a blog and listserv on the implications of a bankruptcy case on practitioners. She also completed courses through the LL.M. in Bankruptcy program at St. John’s and earned a Dean’s Award for Excellence in Reorganization under Chapter 11. Also at St. John’s, Ms. Adams worked in a debtor-creditor litigation clinic where she represented elderly, low-income individuals. She received a B.A., summa cum laude and Phi Beta Kappa, for a double major in government and law and women’s and gender studies from Lafayette College.

U.S. District Court for the District of Maryland

U.S. Bankruptcy Court for the District of Columbia

U.S. District Court for the District of Columbia

Supreme Court of the United States of America

In re: Whiskey One Eight, LLC

In re: Steven F. Madeoy

Represent Chapter 7 trustee by handling all aspects of case, including litigating multiple adversary proceedings and liquidating entities, real properties and other assets of the estate.

In re: Enrizon Worldwide, Inc.

Represented Chapter 11 entity debtor in approval of disclosure statement and confirmation of plan of liquidation.

Successfully pursued and settled separate objections to debtor’s disclosure statement and to confirmation of debtor’s Chapter 11 plan, in debtor’s fourth bankruptcy case, for a secured creditor and an unsecured creditor by negotiating favorable early payments to creditors at closing on sale of debtor’s real property for $17,050,000.

Successfully defended Chapter 7 trustee in adversary proceeding by creditor seeking reformation of deed of trust and determination of extent, priority, and amount of lien against debtor’s membership interest in a limited liability company.

For a copy of the court’s decision, please click here.

Friedman and Stackman, Co-Trustees of The Michael J. Friedman Family Trust and as Personal Representatives of the Estate of Rhona Friedman v. Roger Schlossberg

In re: Steven F. Madeoy

Successfully represented bankruptcy trustee in negotiating settlement with exchange of membership interest in debtor’s limited liability company and assignment of unsecured claim for payment of funds to bankruptcy estate.

In re: FPMI Solutions, Inc.

Counsel for small business undergoing re-domestication of principal office from Virginia to Maryland.

In re: Flat Out Crazy LLC

Secured creditor’s counsel in the bankruptcy cases of two restaurant chains in the Southern District of New York.

The Inn at the Chesapeake Bay Beach Club

Bankruptcy Bar Association for the District of Maryland

Panelist, “So you want to be the Liquidating Trustee or Distribution Agent?”, Walter Chandler American Inn of Court in Washington, D.C.

Speaker, “Serving the Insolvent or Bankrupt Client and Getting Paid”, National Association of Certified Valuators and Analysts in Maryland

Panelist, "Behind the Scenes: Roundtable Discussions with Bankruptcy Judges", Suffolk Academy of Law in New York

Dean’s Awards for Excellence in Reorganization under Chapter 11 and Drafting: Contracts

Award recipient of “Celebrate Long Island’s Young Professionals: Honoring 30 Young People under the Age of 30” from the Huntington Township Chamber of Commerce